Let’s say you’ve recently had unprotected sex and now you’re worried that you may have picked up a sexually transmitted disease (STD). With STD rates rising higher than ever before, this is a totally valid and legitimate concern. So what do you do? Getting tested would be a very smart decision, but you may be surprised to learn that you can actually test too early.

If you feel like you could have contracted an STD, your instinct may be to get tested immediately, but this can be a huge mistake. Testing too early can cause inaccurate results, possibly leading you to believe you’re STD-free when you’re really not. This is because each STD has its own unique “incubation period,” which you must out wait in order to get accurate results. Like many things in life, timing is everything. 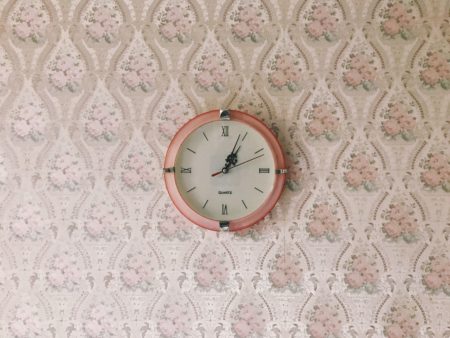 What Is an STD Incubation Period?

An incubation period is the span of time from when you first come in contact with an STD to when antibodies form to fight the STD1). Tests look for the presence of these antibodies during testing2), and if you do not wait until the incubation period has ended, you may not allow your body sufficient time to develop enough antibodies for it to show up in testing, causing a false-negative result.

Even after you have waited for the incubation period to end, you may not see signs or symptoms of the STD. Many STDs do not display symptoms at all or are so subtle that you could think you have a cold or a rash. Your symptoms come and go, but this doesn’t mean the STD has gone away. This is why it’s so important to get tested; there is simply no other way to be 100% sure of an STD diagnosis.

When Should I Get Tested for STDs?

How Soon Do STD Symptoms Appear?

How long it takes for an STD to show up in testing is entirely dependent on the STD itself, how long its own incubation period is, and your own body’s immune response. You can test for some STDs, like chlamydia, only a day after potential exposure. Meanwhile, HIV and syphilis can take a month or more before you can accurately test for them. It’s all pretty confusing but lucky for you, we created a nifty little chart that breaks down each STD’s average incubation period.

Chlamydia is the most reported STD in the U.S. Anyone who has unprotected sex can get chlamydia, however, it poses the greatest threat to women. If untreated, chlamydia can spread to the uterus and fallopian tubes, possibly causing pelvic inflammatory disease (PID) or infertility. The window period for chlamydia may range from 5 days up to two weeks3). After being treated, it is best to test again two weeks after completing treatment to ensure the STD is completely gone.

Like chlamydia, gonorrhea is an extremely common STD in the U.S. It’s a bacterial STD that normally poses little harm and can typically be treated with antibiotics, but can cause greater issues if left untreated. Gonorrhea has an incubation period of only 2-6 days, so you can get tested for it shortly after exposure. Pregnant women should consider getting tested for gonorrhea because it is one of the many STDs that can be transmitted during birth.

If you would like to test for gonorrhea, consider also testing for chlamydia as these two STDs frequently occur together. 4)

Syphilis is an STD that is infamous for being difficult to diagnose due to how common its symptoms are. So much so, that syphilis is sometimes called “The Great Imitator.” Worse, these common symptoms typically go away on their own over time, yet the disease will still remain. Syphilis has the capacity to cause serious damage if left untreated, but this takes years. This slow progression is reflected in its incubation period with the first symptom at 21 days but can often range from 10 to 90 days after infection.5) You should retest for syphilis three months after treatment to ensure you’re completely cured. 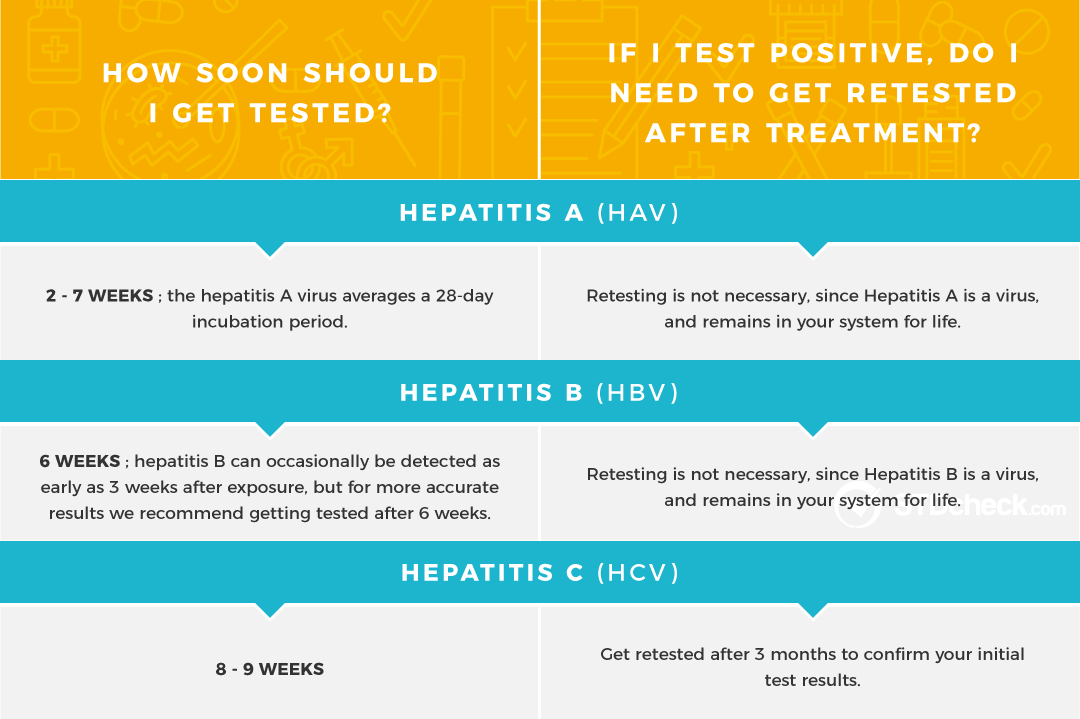 There are three types of major hepatitis: A, B, and C. All types of hepatitis cause liver inflammation and have similar symptoms, with the main differences between them being the recovery time and chances of developing into long-term infections. Hepatitis A will not develop into a chronic infection, and it generally heals itself in about 60 days. Hepatitis B can become chronic, and it takes about 6 months to recover from. Hepatitis C is very likely to develop into a chronic infection, and it can take months to recover from.

The testing window for each type of hepatitis is as follows:

The herpes simplex virus (HSV) can cause sores to appear around the mouth, genitals, and other areas of the body. These sores are both irritating and highly infectious, and direct contact with them is one of the main methods for transmitting herpes. Because the virus can spread through kissing, skin-to-skin contact, and oral, anal, and vaginal sex, it is very common. Herpes comes in two forms: HSV-1 and HSV-2, which are sometimes known respectively as “oral herpes” and “genital herpes,” despite that neither type of herpes exclusively affects a single region.  Many unknowingly carry herpes infections without issue, but there is treatment available to manage extreme cases for those who need it. It is best to wait 4-6 weeks after the potential first exposure to be tested. 9)

Human immunodeficiency virus (HIV) is an STD that destroys immune cells known as “CD4 cells,” which are a type of white blood cell. These CD4 cells are vital for the maintenance of your immune system. When they’re destroyed, your immune system becomes damaged and unable to fight off diseases.  HIV can be treated with HIV-specific medications known as antiretroviral therapy (ART), but if left untreated the virus will almost always progress into acquired immunodeficiency syndrome (AIDS). AIDS is typically fatal, however, thanks to ART, it is possible to live a long, healthy life with HIV and prevent AIDS from developing.

Of the two types of HIV tests that we offer, the HIV RNA test for early detection has the shortest incubation period. When tested using this method, HIV has an incubation period of only 9-11 days. HIV RNA tests have shorter incubation periods than HIV antibody tests because they search your blood for the presence of the HIV virus itself, and not the antibodies to the virus.

HIV antibody testing is the second method of testing we offer. Because this type of HIV test looks for antibodies, which take time to develop, it requires you to wait 1-3 months before it can show you an accurate result. Further confirmatory testing is performed on all positive HIV results, regardless of method. 10)

We know it can be hard to wait to get tested. As soon as the thought crosses your mind that you may have an STD, you want to learn your status ASAP. But you know now that’s probably not the best idea. You don’t want to test too early, and you also don’t want to have to visit our labs multiple times because of all the different STD incubation periods.

To make it easy and only have to test once, we suggest waiting to test according to the STD with the longest incubation period. For example, If you wanted to test for every STD mentioned on this blog post using our comprehensive 10 test STD panel, you would need to wait at least eight weeks to get accurate results, because that is the minimum amount of time hepatitis C needs before it shows up on tests.

All supplements and productsn on this website are fulfilled through Amazon.com